The 2016 Children’s Prize was awarded to Dr. Peter Wright who set out to address maternal and child health within the nation of Haiti. Dr. Wright is a current Professor of Pediatrics at Dartmouth Geisel School of Medicine and at the time had been focusing on pediatric health in Haiti for around 42 years. Dr. Wright would spend months each year setting up clinics training physicians and meeting with the Haitian Ministry of Health. His goal was to identify problems regarding delivery among mothers and childrens and through that produce solutions. Dr. Wright dedicated his career to gaining in-depth knowledge of the health care system in Haiti and how he could systematically improve it. 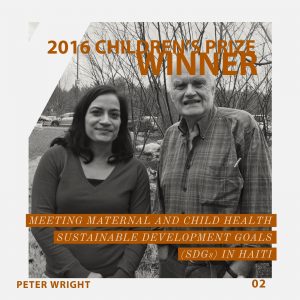 Dr. Peter Wright identified the problem of stagnation in the health care system in Haiti. Through much research Dr. Wright identified that he wanted to focus specifically on referral and care of critically ill newborns who experience respiratory distress but are otherwise healthy. In 2013, of all the under-5 deaths in Haiti 38% occurred within the first 28 days. Additionally, around 65% of those neonatal deaths were caused by something associated with respiratory distress. This includes prematurity, birth asphyxia, birth trauma and sepsis.

The focus of Dr. Wright’s project was located in Hôpital Immaculée Conception (HIC) in Les Cayes. The Hospital serves as a referral hospital for the Sud department of Haiti. Before Dr. Wright’s project, the hospital did not have the capacity to resuscitate newborns or provide ongoing respiratory support. HIC was lacking a trained neonatal team which limited their capacity to provide neonatal care.

Dr. Peter Wright teamed up with Dr. Alka Dev to build a model aimed at reducing the perinatal mortality rate by introducing a low-cost, highly effective neonatology service at HIC. The project had three major parts to it including introducing neonatal resuscitation with the capacity for CPAP which stands for Continuous Positive Airway Pressure. CPAP is needed in the first week of life of a newborn. The second part of the project was to establish a neonatal care service and the final part was to train key health staff in neonatal care.

The project presented by Dr. Wright was special in its approach that aimed at targeting the public sector of a low-income country. Between January 2013 and July 2016, there were 11,887 births at HIC, so having a project that directly improved the care of a public high trafficked facility was a great intervention.

You can find Dr. Wrights information on the Dartmouth page to learn more.